On October 15, 1955, on the advice of his young wife Pauline, Ernie DeRaps joined the Coast Guard. A year later, one night after she’d tucked their one-year-old son into bed, Ernie asked her how’d she like to live in a lighthouse 10 miles off the coast of Maine on Monhegan Island.

In a book that Ernie and Pauline co-authored years later, Pauline wrote, “Yes, I said. Let’s do it. It will be something different. We can write our memoirs about living in a lighthouse and any experiences we have. I will miss being near my parents, but we do what we have to do.”

The DeRaps family ended up living in three Maine lighthouses:

Ernie was also a lighthouse keeper at a solitary assignment:

They went on to have six children, although not all of them got to enjoy the adventures of living in a lighthouse.

Ernie and Pauline wrote about their lighthouse experiences in a delightful and interesting back-to-back double book called:

The book is available on Ernie’s website Pigment ART and on Amazon. 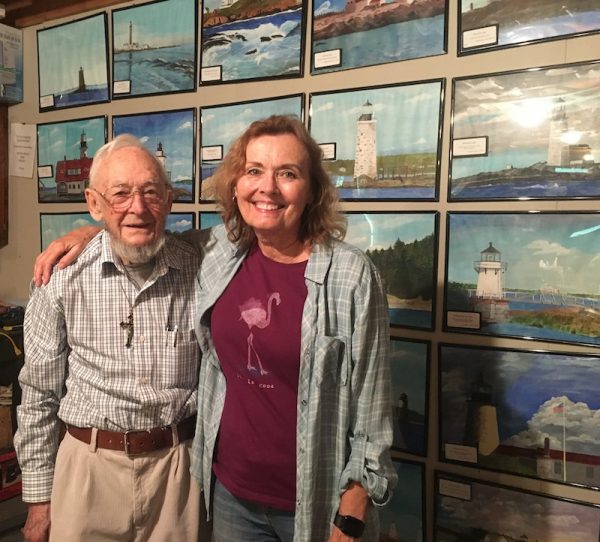 I had the pleasure of chatting with Ernie at his home in Richmond recently. Pauline passed away a few years ago and he lives alone now, but his children and grandchildren live nearby. At 91, he may move a little more slowly than he used to, but he still keeps busy and he still has lots of stories to tell. I know you’ll enjoy the stories he told during our conversation.

Listen to my conversation with Ernie

Where else you can find and subscribe to the podcast

Read a transcript of our conversation

Conversations About Aging airs every other Monday. My next conversation is with Joanne Santee, age 78. Joanne was born on North Haven, an island in Penobscot Bay about twelve miles off the coast of Rockland. She’s lived all over the United States, but because of health issues, she has returned home to North Haven.

Just a few years ago, Joanne might have had to move to an assisted living facility on the mainland. Thanks to the generosity of a group of North Haven residents, a beautiful new residential care facility recently opened on the island. It’s called Southern Harbor House and it’s what Joanne now calls home.

If you have any suggestions for people I should consider interviewing or you’re aware of a helpful aging resource in your community, let me know. In addition to the podcast, I intend to blog about what various communities, organizations, and individuals are doing to provide age-friendly services, support, and connection here in Maine. The best way to get in touch is to send me an email. Thank you!

Please share the podcast with friends, family, on social media, everywhere. You’re also welcome to become a member of our Facebook group Conversations About Aging.