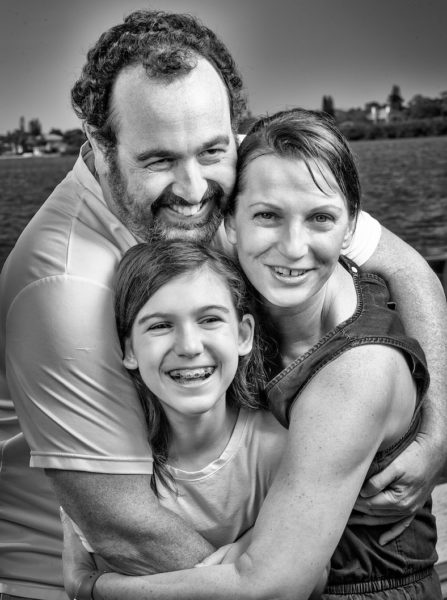 Nearly 18 million Americans have sleep apnea. Adam Amdur is one of them. So is his wife Justine. And their daughter Mia. It’s a condition that affects people of all ages. When someone has sleep apnea, they stop breathing while they are asleep. It can happen hundreds of times and the person may be totally unaware. The only clue might be that he or she is always tired during the day or is a heavy snorer.

Adam was diagnosed with severe obstructive sleep apnea in 2008. Obstructive sleep apnea is the most common type. It happens because something is blocking the airway, usually soft tissue in the back of the throat that collapses and closes during sleep. If someone has central sleep apnea, it’s not caused by a blockage but happens because the brain fails to send a signal to the muscles that control breathing. If you have a combination of these two types it’s called mixed sleep apnea. No matter what’s causing it, when you have sleep apnea and stop breathing, the brain kicks in and alerts the respiratory system to start breathing again.

There can be serious consequences when you repeatedly stop breathing, even for a few seconds. Here’s a list of some of them from the American Sleep Apnea Association (ASAA).

Adam is ASAA’s Chief Patient Officer and Chairman. The organization was founded in 1990 and is a “patient-led, non-profit organization dedicated to the promotion of sleep health through research, advocacy, and education.”

On September 5, 2018, ASSA published Raising Voices for Progress in Treatment and Care, a comprehensive report that details how much people with sleep apnea suffer in the United States and the barriers they face trying to get a proper diagnosis and treatment. The findings were based on a survey of 5,630 patients and first-person accounts that were shared at a day-long meeting with FDA officials in June 2018.

“It is the most complete account of sleep apnea from a patient point-of-view in existence,” said Adam.“The powerful testimonies delivered on June 8 and through the survey illustrate the good, the bad, and the ugly of the patient journey with sleep apnea; these testimonies also chart an advocacy agenda to address our community’s many and varied unmet needs.”

The meeting with FDA officials in June was especially important, said Adam, because it included both the pharmaceutical and the device side of sleep apnea treatment.

“Sleep apnea has always only been dealt with on the device side, not realizing that our patients are not only using devices, but they’re also managing chronic co-morbidities like diabetes or heart disease or mental health issues or anything else under the sun. Having a meeting about one disease with different sides represented is groundbreaking in 2018. That’s how far behind healthcare system really is.”

People’s understanding of sleep apnea is also far behind. For example, while risk factors include being male, overweight, and over 40, sleep apnea can strike anyone at any age. “The stereotype is the obese male,” Adam explained, “but what we found in our survey is that not only is there a 50/ 50 gender split, there are people who have been misdiagnosed or untreated for years, even decades.”

Key findings in the report include:

Adam’s sleep apnea probably began when he was a child. “I remember my mother told me I had extra teeth,” he said. “The truth was I didn’t have extra teeth, my mouth was too small, and the protocol in those days was they pulled teeth. What we know now is that it did more harm than good and that the wider our mouth, the wider our airway.”

If you look at that in reverse, the narrower your mouth, the narrower your airway, which is what also caused his daughter Mia’s sleep apnea. Adam didn’t get diagnosed or start treatment until he was well into adulthood, but Mia’s treatment started early. “At two years old, she stopped breathing 27 times a night,” he said. “She’s now 10 and has been treated for about eight years. If she and I bite into an apple, her bite is twice as wide as mine because we started treating her airway and her bite at two, three years old.”

A variety of treatment options are available for sleep apnea, including positive airway pressure (PAP) devices, oral appliances, and surgery. In Mia’s case, her tonsils and adenoids were removed and she was fitted with a palatal expander, which gradually widens the upper jaw. “A lot of orthodontists are using an expander in children about eight to 13. What we’re finding is that the earlier, the better because children’s bones are still soft and malleable. Something to know is that a very high palate (roof of the mouth) and a recessed chin are warning signs for any sort of sleep apnea or sleep disorder breathing. So is sleeping in child’s pose.”

Adam went 35 years without a diagnosis and without a good night’s sleep. When he finally had a sleep study, he stopped breathing almost 76 times in 20 minutes. That night he had his first treatment, which opened his airways and the door to a whole new life. “I felt like I was shot out of a cannon the next morning because my sleep apnea was so severe that I finally had my first good night of sleep in probably my entire life.”

Based on ASAA’s survey, there is a long list of symptoms that can be associated with sleep apnea.

If you suspect you may have sleep apnea, you’ll find more information on ASAA’s website, including about its CPAP Assistance Program, AWAKE education and support groups, and its annual awareness campaign Sleeptember.